Our Church
/ Our Church
Orthodoxy, the Church for all Mankind 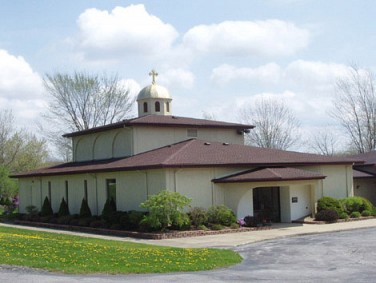 If you have experienced the Orthodox Christian Church before, you may be familiar with the different ethnic flavors that are generally associated with our ancient Church. Our parish is part of the "Orthodox Church In America." We are often asked, "So how does your Church compare to Greek Orthodoxy, or Russian Orthodoxy, or Serbian, or Romanian, or Antiochian Orthodoxy?" Our answer is: We are the same Church, but a self-governing American Church with our express mission to Americans. All Orthodox Churches are fundamentally the same with some differences in customs and language. For a more detailed explanation of the American Orthodox Church, visit oca.org.

Our Parish had its beginnings in the mid 70's as a mission of 19 households from Lake and Geauga counties. For 10 years the faithful met for Vespers and Liturgy at St. James Episcopal Church in Painesville. In March of 1983 the first Litrugy was served in the new church building with the official consecration following in September of that year. In October of 1986, Father Andrew Clements was assigned as pastor to Saint Nicholas. In April of 1989 a church school/social hall was added.

Our parish now boasts a membership of over 100 households from Lake, Geauga, Ashtabula, Cuyahoga, and Summit counties. Faithful from Greek, Russian, Serbian, Romanian, Macedonian, and Lebanese backgrounds now call St. Nicholas their home church. Also, over half of our community is now made up of converts whose ethnic heritages are not rooted in any of the historic Orthodox countries.

Jesus Christ commisioned his followers to "baptize all nations." That same ancient Church is right here doing just that by reaching out to all, preaching the Faith of the Apostles and worshipping in English. We welcome you no matter where your grandparents were born.